Contact us at:
Dept. of Chemistry and Biochemistry
University of Oklahoma
101 Stephenson Parkway
Norman, OK 73019-5251,USA

Over the last few decades, computational science has extended the range of phenomena that can be investigated within the framework of physics. An important example are complex systems like spin glasses or neural networks. These systems are hampered by common problems and can be studied with similar techniques. Our research concentrates on a biological case of complex systems, the physics of proteins. Here, it is crucial to understand for a given protein the relation between its sequence of amino acids and the set of thermally accessible conformations, and to comprehend the mechanism by which the protein folds into its native structure. Obviously this problem is of enormous importance as the function of a protein is closely related to its 3D shape, and mis-folded proteins can cause a variety of diseases. Hence, a detailed knowledge of the sequence-structure relation could lead to a deeper understanding of various diseases and to the de novo design of novel drugs with customized properties.

Computer experiments offer one way to gain such knowledge but are extremely difficult for realistic protein models: all-atom models lead to a rough energy landscape with a huge number of local minima separated by high barriers. Hence, sampling of low-energy conformations becomes a hard computational task, and physical quantities cannot be calculated accurately from simple low-temperature molecular dynamics or Monte Carlo simulations. Overcoming this obstacle is one of the defining challenges in high performance computing requiring both new hardware and new algorithms. 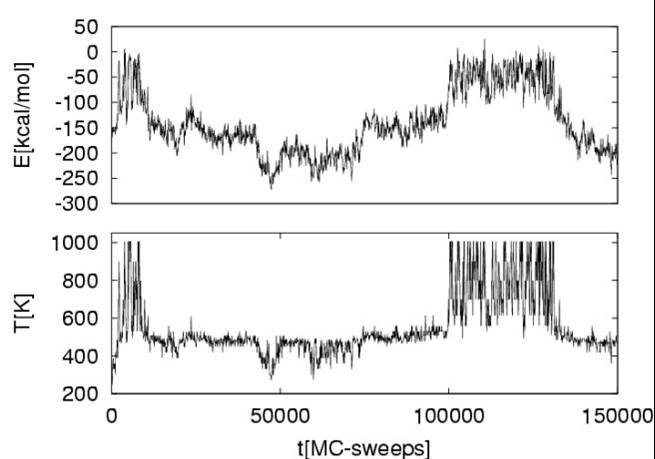 A significant part of our research is concerned with the later point. Its center piece is the continuing development and advancement of novel numerical techniques (the generalized-ensemble approach) with the final goal of simulating stable domains in proteins (usually of order 50-200 residues). Multicanonical sampling, parallel tempering and energy landscape paving are some of the techniques used in our group. These techniques allow sampling of low-energy configurations without that the simulations gets trapped in a local minimum. As an example we show in the figure the time series of temperature and energy as obtained in a parallel tempering simulation of the 36-residue protein HP-36. The figure is taken from C.Y. Lin, C.-K. Hu and U.H.E. Hansmann, Proteins 52 (2003) 436. Related to our algorithmic work is the development and publication of new software for simulations of protein. Our programs are collected in the free program package SMMP (Simple Molecular Mechanics for Proteins). 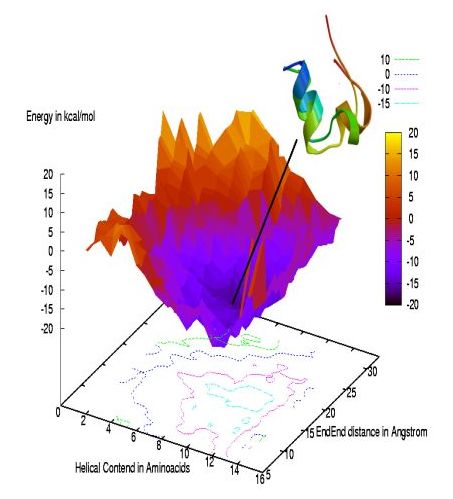 Current applications of our techniques focus on carefully chosen proteins ranging from the 28-residue Fsd-Ey up to the 75-residue apocalbindin D9K probing the mechanism of folding in small proteins and the conditions under which proteins mis-fold and aggregate. This often involves analysis of the energy landscape of these molecules. We show as an example the folding funnel of the 20-residue trp-cage protein with an overlap of the configuration found at the bottom of the funnel with the experimentally determined structure (the figure is taken from A. Schug, W. Wenzel and U.H.E. Hansmann, J. Chem. Phys., 122 (2005) 194711). Protein-ligand binding and protein interaction networks are other questions that we study and provide an interface with bioinformatics groups. This biologically motivated research is supported by the National Institutes of Health (NIH) under contract GM120634.

A more detailed introduction into the research of our group can be found in the Statement of Research Interests of Prof. Hansmann.